Mr Hurst, of Avenue Range, South Australia, has served for the past six years on the AWSA board, and was elected at the annual general meeting held on February 13. 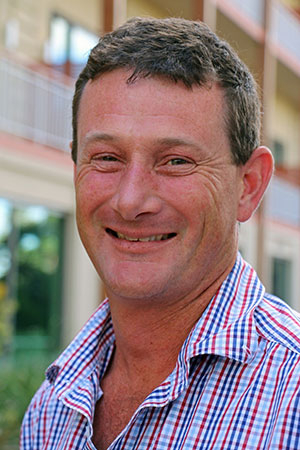 He turns off White Suffolk-Merino cross lambs either as suckers at 24kg dressed weight, or finished on bean stubbles to target 26kg carcass weight for Victorian and South Australian processors.

“As seedstock producers, we are passionate about what we do and I wanted to be involved with the breed association,’’ Mr Hurst said.

“It’s my turn to put something back into the industry.’’

“We would like to finalise that over the next 12 to 18 months to have it out there for our commercial membership,’’ Mr Hurst said.

“Commercial members are the backbone of our industry but at the same time we must maintain our stud membership and encourage the younger members.’’

Mr Hurst said the breed was tracking well for carcass traits on LAMBPLAN and this performance was reinforced by processor feedback.

“It’s a matter of keeping up with the times and what our customers are looking for – that is, consistency of product, evenness in fat cover, taste, flavor and tenderness,’’ he said.

“Intramuscular fat is a big part of it but not the be all and end all – meat eating quality is a diverse package including shear force, IMF, tenderness, taste.

“As a breed, if we can work on that complete package we are certainly on the right track.

“Those who have led the association in the past have put in a lot of work and we now have a commercial industry of seven to eight million White Suffolk sired lambs.

“We have a diverse area we are pulling those lambs from but there is also a variance in our product to suit specific markets across a 12 month supply.’’

Retiring Federal Council president Peter Button, Minlaton, SA, cited the implementation of mandatory ovine brucellosis accreditation for the membership as a highlight of his two-year term.

“It (ovine brucellosis) is an issue in the industry and as a breed we are proactive in helping to control that,’’ Mr Button said.

He said all breeders needed to take ownership of genetic gain and performance recording.

“Down the track when commercial producers are rewarded for meat eating quality traits, then we will see the real benefits of it.

“We have a lot of young members coming into the breed and they are arriving at the right time to take on this technology and grow with it.

“Industry is asking for data so we’ve got to stay ahead of the pack.

“Given our involvement with data recording and genetic performance, White Suffolk is the best option for commercial Merino breeders and those moving back into sheep.’’