The lamb produced by the Kurtz family, of Oberon, has graced the tables of famed Chinese restaurant, Billy Kwong, and featured in televised cooking shows with Paul Mercurio. 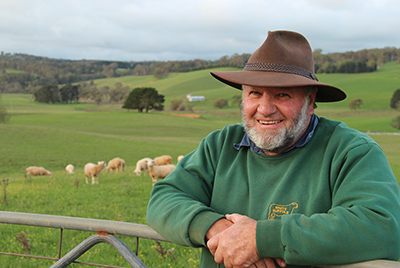 Paul and Virginia Kurtz, and daughter Tammy, have three joinings within their flock to ensure a supply of lambs over a sustained period.

Virginia runs 100 White Suffolk ewes and 100 Blue-E cows on a 405ha property at Tarana, near Bathurst.

Set in a 850mm rainfall zone, “Lynden” has a double frontage to the Fish River and rises to an altitude of 1250m.

The family converted to biodynamic farming 25 years ago after seeing a television program on the practice.

“Virginia was always health conscious and she was a driving force behind it,’’ Mr Kurtz said.

“I must confess it worried me because we had thistle problems and I thought they would overtake us, but that never happened.

“We stepped in cold turkey and stopped using pesticides, drenches and herbicides.’’

Sheep and cattle are now rotationally grazed, while labour and management efficiency has increased.

“With biodynamics, there is very little bloat – we drench the sheep with garlic, wormwood and cider or copper sulphate,’’ Mr Kurtz said.

The soil activator made from fermented cow manure, BD 500, is applied annually as a spray to add microbes to the soil under cool and moist conditions.

“When we first made the conversion, I noticed rooting depth and soil structure and moisture absorption had improved quite dramatically,’’ Mr Kurtz said.

“We now make greater use of rainfall and the stock do well, enabling us to turn steers off year round.

The family runs a herd of 90 Red Angus cows joined to moderate framed Red Angus bulls for a spring calving.

The calves are grass finished to meet the Demeter specifications of 200-250kg carcass weight and fat score two to three, and slaughtered fortnightly at Cowra.

The Demeter beef is marketed through Sydney retail butchers at Bondi and Rozelle.

The family began retaining White Suffolk ewe lambs in 1982 for their mothering ability and carcass.

They had switched from Border Leicester-Merino cross ewes joined to Poll Dorset rams to pure White Suffolk in 1978.

“We liked the ease of lambing and clean points as we always had trouble with grass seeds in the eyes,’’ Mr Kurtz said.

“The White Suffolk lambs finished well and the buyers liked them. We have concentrated on producing a maternal line of genetics.’’

Ewes are shorn in November and lambs in January, with the wool sold as Demeter biodynamic for the doona market.

Breeding objectives have focused on early maturity and carcass quality with the right fat cover.

Mr Kurtz said early maturity, muscle and red meat yield in the progeny had to be balanced with fat cover in the ewes to cope with extreme weather conditions.

The lambs are finished on ryegrass, phalaris, cocksfoot and clover pastures, and grazing oats, to fat score two to three, a carcass weight of 20-25kg and 46-50 per cent yield.

“Having lambs ready every fortnight takes a lot of organisation, and it involves a 400km round trip to the abattoir at Cowra,’’ Mr Kurtz said.

“When the physical market is high we get very little premium for our lambs but we work on a set price which doesn’t follow the market.’’

The Cowobbee Demeter strip brand is used to denote the family’s lamb carcasses.

“Demand is strong and we could easily treble or quadruple our market – I wish was 20 years younger,’’Mr Kurtz said.

“We have received good feedback on the flavour and well shaped carcasses of the White Suffolk.

“The tenderness and overall appeal means we have customers who won’t buy anything else.’’

Mr Kurtz said consumers were demanding a quality product with consistently good taste, and produced in a clean, green environment.

“In our case, we are chemical free and that is a big priority for our customers,’’ he said.

“We are satisfied knowing we farm in a natural and sustainable way that won’t harm the environment and the people who eat the product.’’