Grain finished White-Suffolk lambs with superior length and weight set the lamb markets abuzz when they broke through the magic $300 price ceiling this year.

For central NSW prime lamb finisher, Graeme Spackman, the price of $300.60 set in July at Forbes saleyards was a defining moment in his farming career. 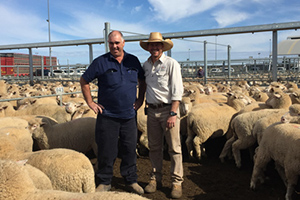 Graeme and his wife Joanne sold a draft of 870 White Suffolk cross extra heavy lambs that day to average $282, with the top pen of 154 sold to Thomas Foods International, Tamworth.

Of the draft, 390 lambs averaged over $300 and 41kg dressed weight – at the time it was a price never before achieved in the nation’s prime lamb markets.

What was even more remarkable that day was 23kg dressed trade lambs making over $9/kg.

The Spackmans saw prices for their trade lambs continue to climb to more than $10/kg over the following months.

The record priced pen of mixed sex lambs had originally been bought for $95-$115 at eight to 14 weeks of age from a producer at Young, shorn and grain finished for 12 weeks.

Graeme and Joanne finish 5000 lambs a year in 10-20ha paddocks comprising either grazing wheat or lucerne crops, supplemented with a barley, lupin and pellet ration plus hay in self-feeders.

The lambs are grazed on stubbles before being introduced to grain at 36-40kg liveweight.

The couple grow their own irrigated and dryland wheat, barley, oats and canola on their 1821ha property at Corinella, and only buy in lupins.

“It was our second year buying those (record price) lambs from the one breeder but we hope to buy them again this year because of the results we have obtained,’’ Mr Spackman said.

“Even my agent couldn’t get over how they performed – I’ve always been a second cross man but these grew into magnificent lambs.

“You always have it in the back of your mind it would be nice to break the $300 mark but I thought they would get in the $290s.

“I knew we wouldn’t hold that record for long but the fact we were the first to obtain $300 for a lamb in Australia can never be taken away.’’

Despite the family farm recording just 100mm of rain for the year, Mr Spackman concedes dry weather is advantageous for finishing lambs.

He uses the one shearer to ensure a perfect job and the lambs are presented with a good skin for market.

Mr Spackman was impressed with the tremendous body length of the lambs.

“We have found this White Suffolk-Merino cross yields well – when we were selling over the hooks, we generally work on a yield of 48 per cent but these went 50-51 per cent,’’ he said.

“The price is back a little at the moment but we expect to have to pay a bit more for these lambs going forward.

“During drought, the gross margin for lambs is well ahead of the crops – when barley was $130/tonne, we could value add so it was working quite well.

“Numbers are a concern – I want quality, well bred lambs and am prepared to pay a little more for them.

“I don’t like paying more than $110 but have paid to $125 for bigger lambs and it worked out quite well as I was able to turn them over faster.’’