Each December, Mr Carey, of Frogmore, NSW, holds an on-property sale where the Dohne cross and Merino progeny, and cast-for-age ewes are sold alongside each other. 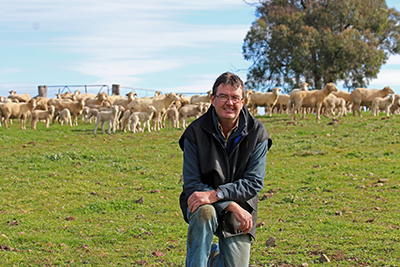 Dan Carey with Dohne-cross ewes and their White Suffolk cross lambs at Ballyhooley.

“If I can run a Dohne ewe cutting 4.5kg of 19 micron wool and give me a sucker lamb without supplementary feeding then I’m well in front,’’ Mr Carey said.

A flock of 500 Dohne F1 and F2 ewes are joined to rams from Kullingrah White Suffolk stud, Frogmore.

“We like the White Suffolk for ease of lambing and management,’’ Mr Carey said.

He said the White Suffolk was a complementary cross for the Dohne’s mix of wool and carcass.

The Dohne cross ewes are marking 100 per cent lambs compared to the Merinos on 75 per cent.

When selecting White Suffolk sires, he looks for muscle, a well shaped loin and length on a moderate frame.

“The rams are going over big framed Dohne ewes so we don’t want them too big, plus our environment doesn’t allow us to finish the lambs as suckers,’’ Mr Carey said.

Dan and his wife Vicki run a sheep and cattle grazing enterprise on the 2300ha property, Ballyhooley.

Dimension Dohnes are developing an internal strain called Dimension Plus focusing on increased crimp and fleeceweight without losing micron and body structure.

Ballyhooley carries 18,000 DSE, all managed by one labour unit.

The property has been refenced into smaller paddocks, with up to 30km of new fencing to increase management efficiency.

Pastures are based on lucerne, phalaris, ryegrass and summer active native grasses.

The winter stocking rate of 7.9 dse/ha is above the district average.

Mr Carey is an advocate of the Lifetime Ewe Management program which he undertook in April with the aim of increasing lamb survival.

“Lifetime Ewe Management has made me more aware of body score and condition of ewes pre and post joining,’’ he said.

“We lamb in July and I don’t want the ewes to be losing bodyweight over summer before joining so graze them on summer active natives on the hills.’’