By Ian Turner
The White Suffolk breed continues its remarkable progress and expansion from humble beginnings back in the 1970s and ‘80s, being formally launched as a breed organisation in 1985.

The focus has clearly been on breeding easy care and highly productive sheep to service the Australian Meat Sheep industry, initially as a terminal sire option, but also as a realistic option for the production of prime lamb dams.

The breed received its first international exposure at the 1989 World Sheep and Wool Congress in Tasmania when a display of select sheep was organised from pioneer breeders. 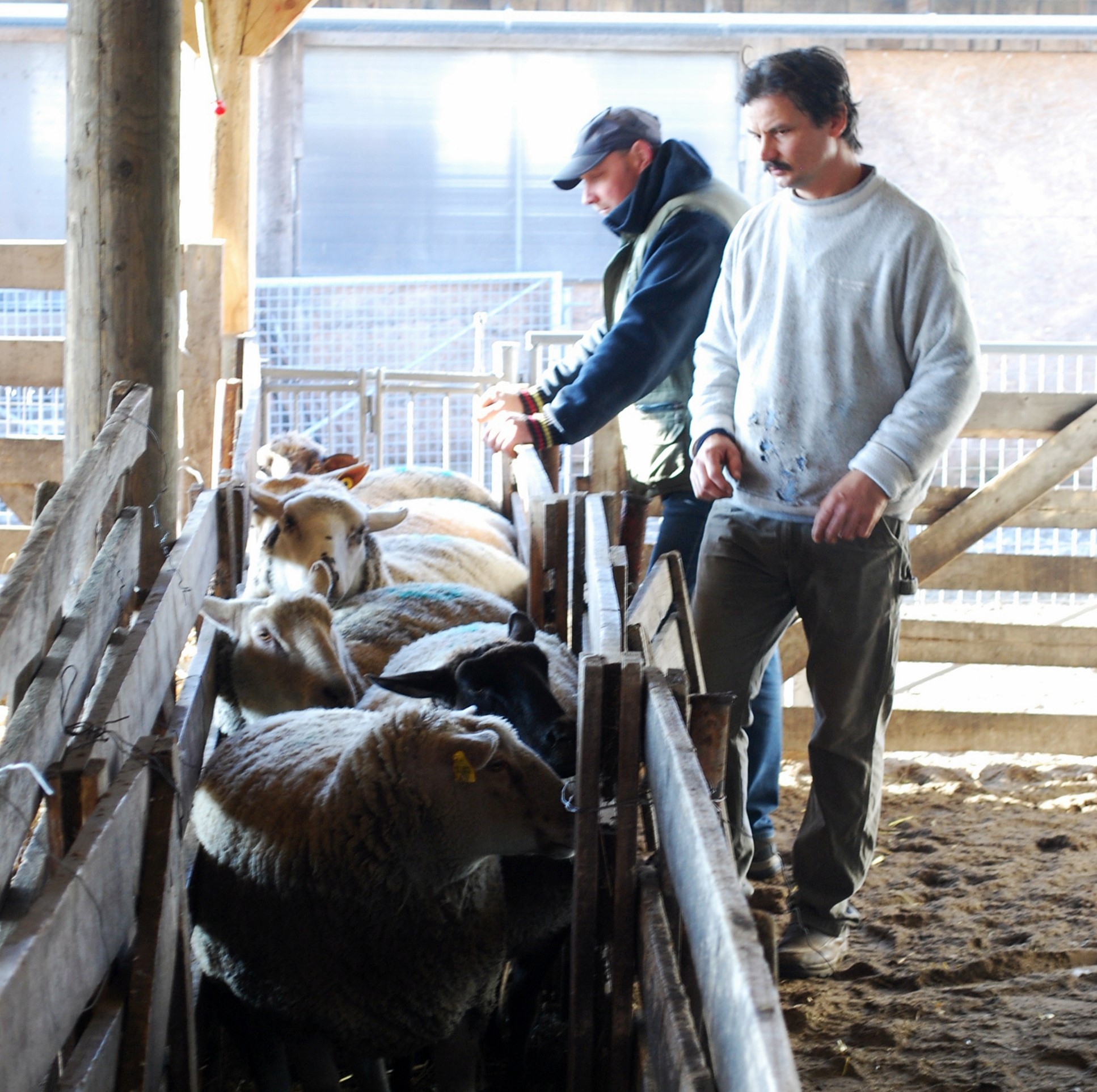 Levente Lajko, closest to camera, looking over some of his commercial ewes bred from imported Australian White Suffolk genetics.

Over the following three decades, the expansion within Australia has seen numbers grow to 336 studs and over 63,000 breeding ewes in 2019.

However, quietly on the side, the breed has also been attracting international interest, with New Zealand becoming the first country to import Australian White Suffolk genetics in 1992. Initially Rissington Co at Napier imported Renrut and later Galaxy Park genetics for their composite breeding program, then Steve Udy, Wakefield imported Burwood genetics in 1994 to establish his Karioi stud.

The USA was the next country to import White Suffolks when Gary Heilig, Prestige Farm stud, Montana purchased his initial genetics from Detpa Grove in 2007.

Now, hungry to secure a piece of the White Suffolk success story, Levente Lajko has ensured Hungary is the third international country to import Australian White Suffolk genetics. He imported frozen embryos in 2016 with the first lambs born in 2017.

Levente runs a small family farm near Ulles in the south of Hungary with his mother (Etelka Farkas) and sister (Anika Lajko). His brother, Laszlo Lajko lives in Florida, but Levente said he also continuously helps the family a lot. The property is 60 hectares of grazable and arable area, which is shared between vegetable growing (mainly paprika) which his sister arranges, and sheep grazing which comes under Levente’s control.

There is a commercial flock of 300 ewes and now this small White Suffolk stud registered under the Fala prefix.

Levente’s wife, Ilona Kiss is a nurse and they have three children, boys Atilla and Levente aged 12 and 15 and a 19 year old daughter, Borbala.

Centuries of land division, primarily through inheritance to multiple children has resulted in ever smaller land holdings, which has resulted in difficulty in making a sustainable living.

“Our fields are very lean with mainly sandy and salty soils, possibly some of the poorest soils in Hungary, which restricts our enterprises to mostly grazing,” Levente said.

He explained there is a big variance in rainfall across Hungary, despite its smallish size, but their region in the south receives 400 to 500 mm of rainfall annually. The seasons within the year range from hot and usually dry summers to cold winters which sometimes run in minus temperatures for several weeks on end.

Hungary joined the EU in 2004 and through the EU Common Agricultural Policy, field owners get financial aid based on area. The objective is to keep people on the land, otherwise they would be forced into the towns and cities and be a bigger burden on the EU finances.

Levente explains, “It is a crazy system and many people get money for their fields without producing anything on it. This area based aid keeps prices per hectare high, even on poor quality soils as we have in this neighbourhood, which is why we cannot afford to increase our farm size.”

“Consequently we rent a further 40 to 50 hectares for growing lucerne, oats and grass for hay for the sheep that are grazed in paddocks around the farmhouse,” he said.

“The EU also places strong emphasis on Scrapie resistance, therefore we cannot sell rams with VRQ allele as G4 or G5. This is also crazy and unnecessary if we don’t feed sheep with animal protein,” he said.

Because of the smaller property sizes, farming is certainly in another dimension from Australia’s larger ‘broad acre’ farming systems, but the common denominator in sheep management is to have hardy, adaptable and productive sheep with strong maternal traits.

“Most of the commercial sheep breeders in Hungary run self-replacing flocks, so good maternal traits are important in any terminal sire breed rams we use, plus they need to be good milking ewes like Suffolks so we can wean lambs as early as possible,” Levente said.

“We have tried most of the available terminal sires over the last 20 years, including western European breeds such as Berrichon du Cher and Texel; but they don’t tolerate our hot summers and longer walking necessary to graze,” Levente said.

“We need ewes that are capable of joining out of season in April/May, to lamb in September to October. Most of our ewes are joined in August-September, thus lambing down in the middle of our winter in January and February,” he said.

“All the ewes that lamb in the winter are kept inside with hay and crop till weaning, because in this period lambs must be fattened intensively as they have to be ready by Easter.”

“We wean them finally at eight to ten weeks of age, but actually start the weaning process earlier every morning and afternoon for a while, then for longer time periods, to force them to eat solid feed as soon as they can.”

“The lambs have a school with pellets and lucerne hay that only they can access. They are vaccinated with Convexin 10 to give protection against Clostridium diseases at two to three weeks of age, plus they are injected with selenium just after birth.”

“We produce suckers of 28 to 30 kg liveweight mainly for the Italian market for Christmas. When they reach that weight, an exporter comes to the farm and pays us subject to the deal we made earlier and then they ship the lambs to Italian slaughter houses,” Levente said.

Because of the lesser sheep numbers, wool harvesting is also substantially different from Australia.

“I try to shear the flock in May, depending on the weather. We don’t class the wool on farm as you do. We put it into big bags and take it to a wool collector. They then sort it into the various quality lines and press into bales, with a majority then going to China,” Levente explained.

It was the desire for a better terminal sire breed that kept Levente searching for other options.

“It was back in 2013 when I randomly stumbled upon a YouTube promotional clip about White Suffolks that sparked my interest,” Levente said.

“Australian breeders know a lot more about the hot weather and handling drought, so I then found the Australian White Suffolk Association’s website and noticed how big and well organised the breed was,” he added.

The White Suffolk breed’s early development coincided with national sire progeny testing schemes and then the development of the Lambplan flock performance recording scheme. Success in those sire progeny testing schemes certainly assisted greatly in the breed’s acceptance, while also, with the breed’s links to several other breeds (primarily Poll Dorsets and Suffolks) used in the whitening process, enabled the Lambplan system to evolve into the across flock & breeds scheme it is today.

That success and role certainly gave incentive to members to use Lambplan and along with breed administrative encouragement, a vast majority of members use it instinctively. That has been a big factor in establishing the commercial breeder preference for White Suffolks that exists today.

“I started a little research on how Lambplan works and concluded that we should import White Suffolks, plus adopt the Lambplan technology, then with this combination in place through AWSA, it must work successfully for us,” Levente said.

“I kept my eyes on the figures of the top White Suffolk breeders and soon realised they are doing a great job and the breed’s development is incredible. I foresee a very bright future for this breed,” he said.

It is one thing to develop the belief, but it is another altogether to successfully put that dream into a successful action plan.

It was in 2015 that Levente implemented the first action on his plan when he sent emails to a few identified leading White Suffolk breeders, querying the possibility of embryo transfer and then importing White Suffolk embryos and/or semen into Hungary.

“I got a response from Steve Funke from the Bundara Downs stud, and then Steve found Murray River Genetics that had EU accreditation for embryo and semen export,” Levente said.

“Bundara Downs has a flock big enough to be able to provide 11 unrelated donor ewes which was ideal for our needs, while also getting genetic diversity,” he added.

The next stage of the plan was to successfully transport the embryos into Hungary. In 2016, one year on from Levente’s initial email contact, 139 frozen embryos were imported. Implantation was undertaken into recipient ewes by a specialist team from the University of Debrecen in 2017. Subsequently 52 lambs were born. 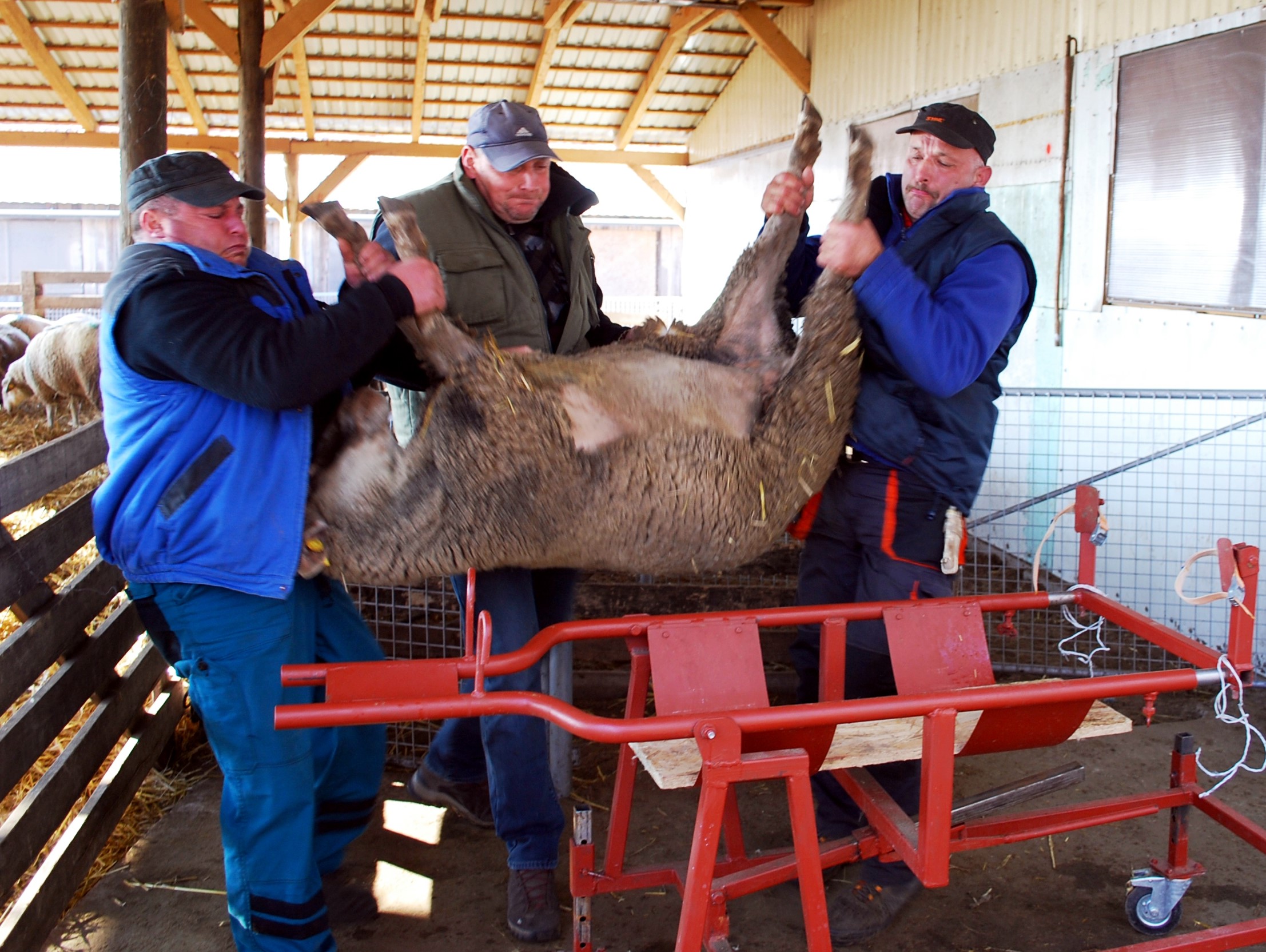 The stud currently comprises 38 registered White Suffolk ewes and Levente’s dream and action plan is well and truly along the road to success. The plan is to increase the size of the stud and of course stimulate wider interest and use of White Suffolks in Hungary and other European countries. Levente has recently commenced the process of importing some semen from the Farrer stud. 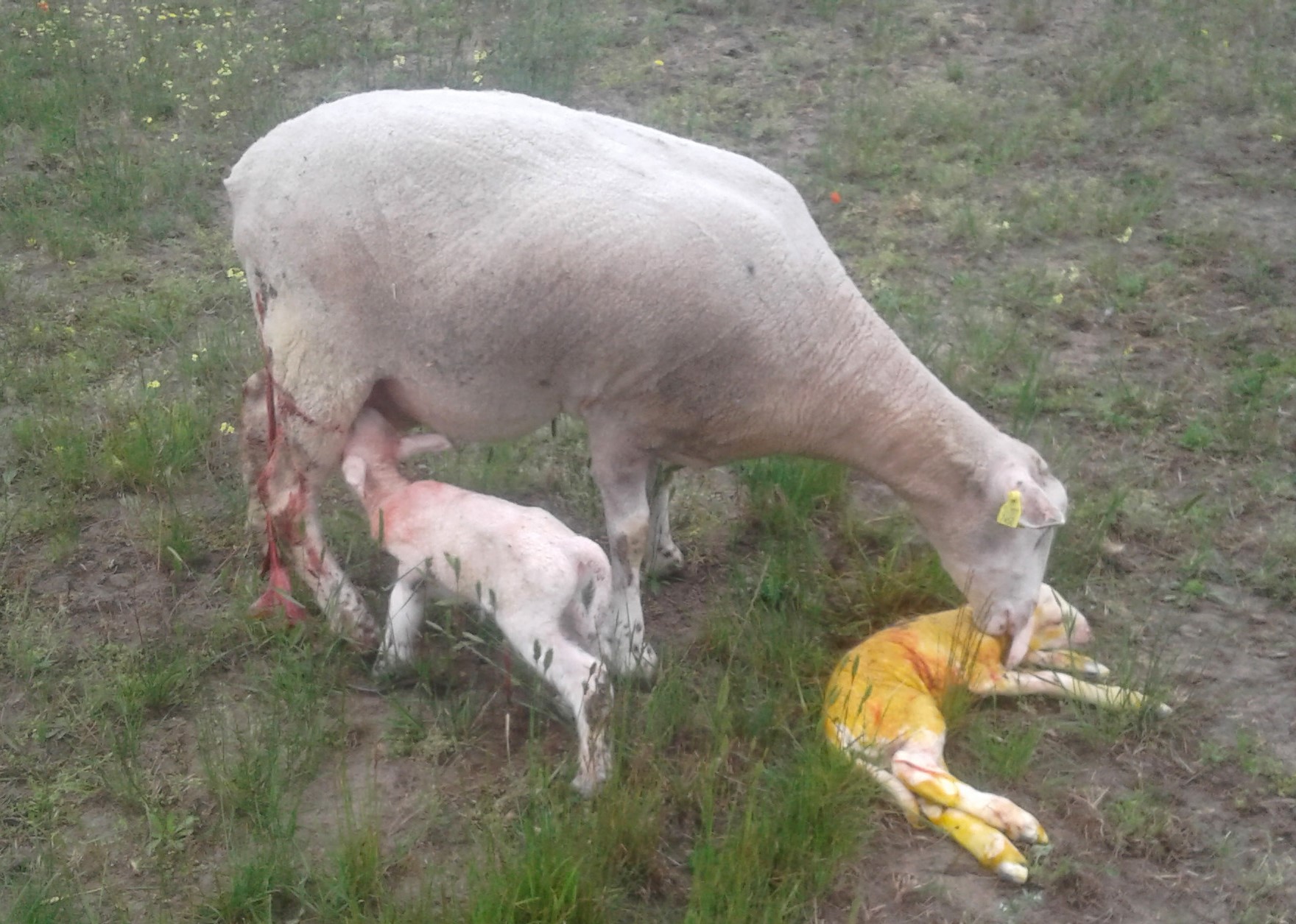 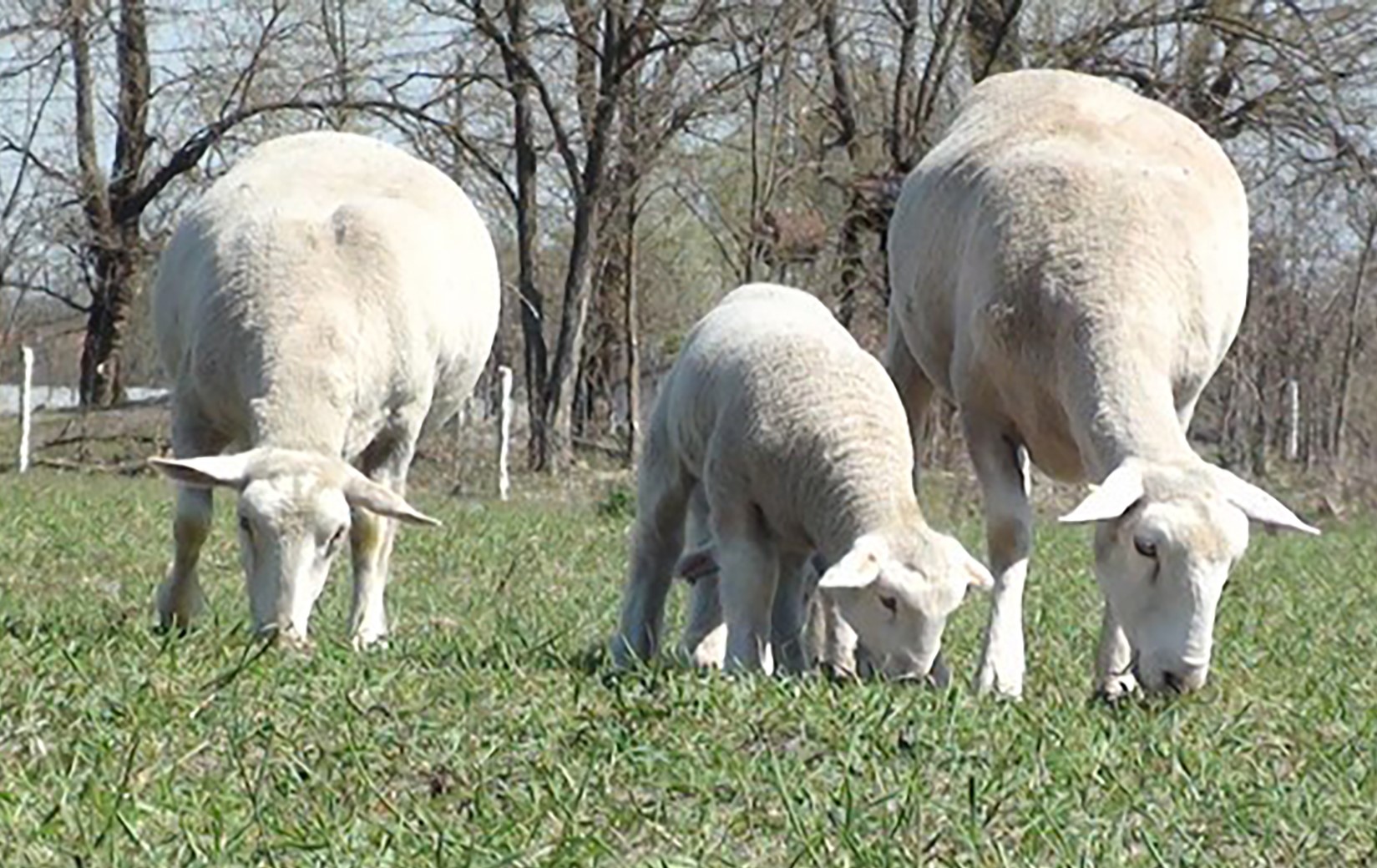 The family received a significant boost in August this year when they exhibited some of their Fala White Suffolks at the annual Debrecen Agricultural Farm and Food Fair. After Budapest, Debrecen is Hungary’s second largest city and is one of the country’s most important cultural centres.

The Fair is the leading international agricultural and food trade fair in Hungary, being established in 1993 by the Centre of Agricultural Sciences at the University of Debrecen and now seeing over 500 exhibitors with up to 50,000 visitors inspecting those sites.

In displaying some sheep from their newly established Fala stud, they came home with very good rewards and most certainly made a significant impression on those who inspected them. 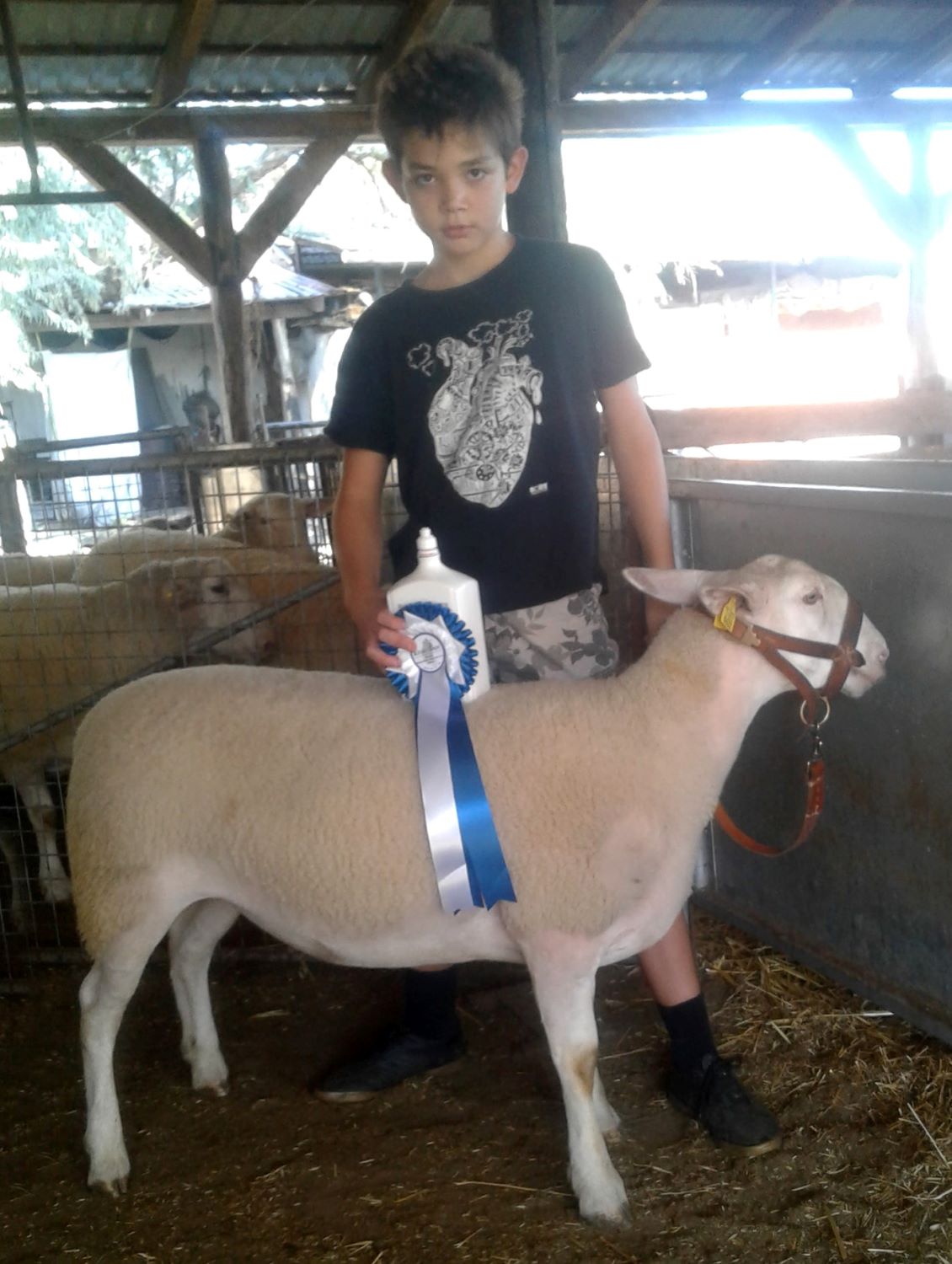 Attila, pictured left, is holding Fala 188622 and the ribbon, the best of the three ewes that won the Allbreeds Ewe Lamb Group class at the Debrecen Agricultural Farm & Food Fair.

“The ewe in the photo is a well muscled  lamb with high growth, but because their head shape is slightly Roman nosed, more like a Border Leicester, which people here are not familiar with, she only got second place in the Allbreed individual sheep class.”

“The White Suffolks are doing fine in this environment. They can tolerate hot summers very well and they certainly produce high growth rates; they are meat mountains,” Levente said.

“We join the stud ewes in October to November so they lamb in Spring onto green. They are run in paddocks with their lambs that we don’t fatten as they will be kept, but they do get supplementary feed if needed in times of drought. The stud lambs are also vaccinated with Covexin 10 and of course get a booster after four to six weeks, while the stud ewe lambs also get a Chlamydia vaccination,” Levente said.

“In the showing at Debrecen last year we only got second and third places, but now judges and breeders are getting to know this breed more, with the flow-on of developing a growing demand for rams,” Levente said.

“As a member of the Australian White Suffolk Association, it feels very good to be included and welcomed and that you all accept Fala as a member of your family; maybe that is the key of your success,” Levente concluded. 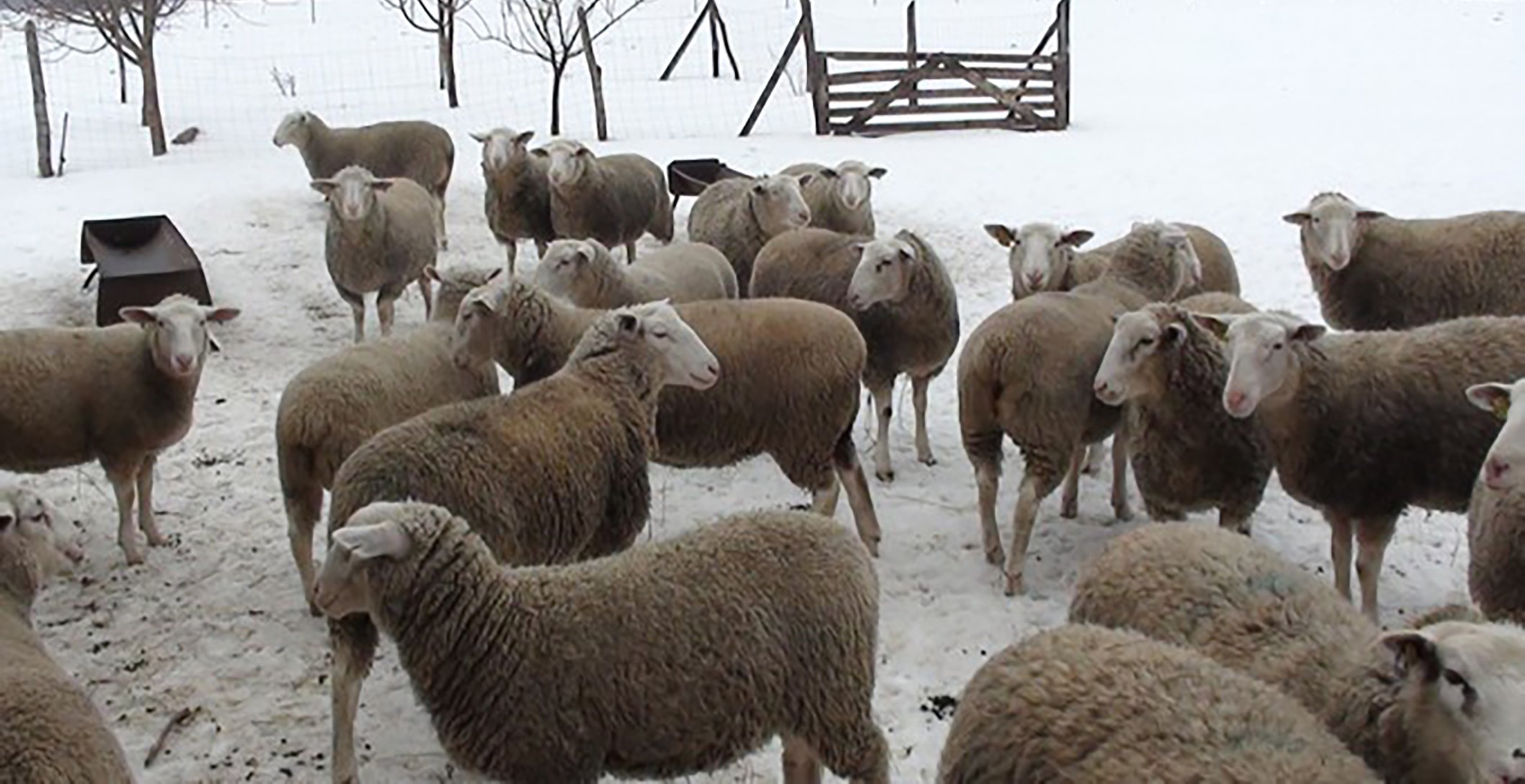