Breeding from ewe lambs increases reproductive efficiency and speeds up genetic improvement programs by decreasing the generational interval. However, conception rates in ewe lambs can be low. Nutrition is known to affect the reproductive success of ewe lambs, although the precise role of diet is largely unknown.

The mechanism is thought to function through effects on metabolic hormones, such as circulating insulin concentrations. Insulin promotes the secretion of reproductive hormones, known as gonadotrophins, which stimulate ovarian activity and encourage oestrus.

When this pathway was examined in post-calving dairy cattle, high starch diets were associated with a faster return to oestrus, which was thought to be caused by increased circulating insulin concentrations. In contrast, high fat diets were associated with reduced insulin concentrations and decreased conception rates. Dietary starch favours the propionate-producing pathway over acetate in the rumen, increasing insulin, whereas dietary fat reduces insulin synthesis and promotes cellular insulin resistance.

The hypothesis we tested was that dietary manipulation of starch and fat would affect fertility in breeding ewe lambs through effects on circulating insulin concentrations. More specifically, high starch (insulin promoting) diets would hasten the onset of oestrous activity and increase conception rates in breeding ewe lambs when compared to those fed high fat (insulin suppressing), diets. 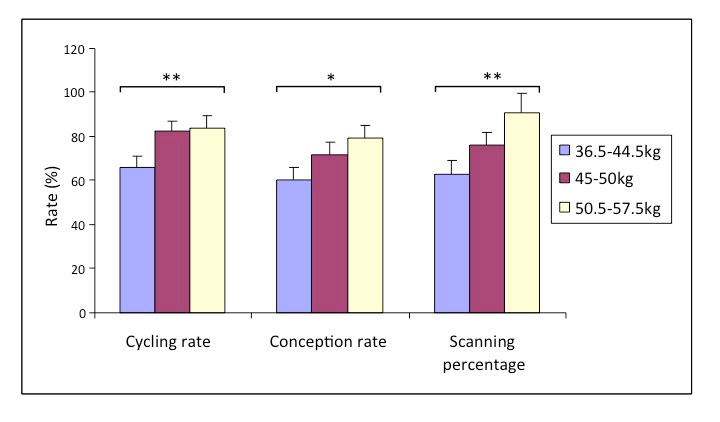 In contrast to work in dairy cattle, our findings demonstrate that feeding a high starch diet to increase insulin concentrations and thereby improve ewe lamb fertility was not effective with the level of dietary starch used in this study.  However, the results do emphasise the importance of providing the necessary nutrition to achieve a suitable body mass for ewe lambs pre-joining, in order to maximise conception rates.