While many prime lamb producers use White Suffolks as a terminal breed, Bob Williamson is capitalizing on the maternal traits of fertility, lambing ease and milking ability.

The northern NSW tablelands grazier is retaining his White Suffolk-Border Liecester-Merino cross ewe lambs, and joining them at eight months of age, or 50kg, to a White Suffolk ram.

Mr Williamson was encouraged to retain the ewe portion as an experiment by his ram supplier, Dugald MacIndoe, Smithston Farms, Glencoe, NSW. 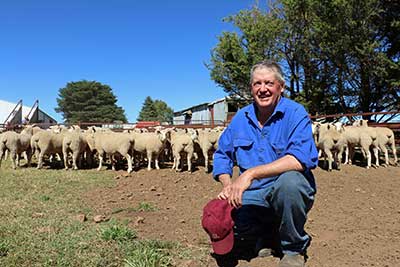 “These ewe lambs did lamb out later than normal but in saying that we get an extra lamb from that ewe over her lifetime,’’ Mr Williamson said.

“By the time they are two-years-old, these ewes have paid for themselves.

“However, nutrition pre and post lambing needs to be spot on.

“There is no discount for the wool from these ewes as it goes into the same bin as the wool from our Border Leicester-Merino cross ewes to average 580c/kg greasy.’’

Chad also runs registered cattle under his own prefix of Chadwick Shorthorns.

The Williamsons run up to 1200 Border Leicester-Merino cross ewes joined to White Suffolk rams, turning off 1400 lambs over-the-hooks a year.

Bob was sourcing the first-cross ewes from a NSW breeder and later turned to other suppliers on AuctionsPlus.

“I look for bigger framed ewes capable of rearing multiple lambs,’’ he said.

The ewes are joined from March for six weeks for an August-September lambing and shorn in May.

“We used to shear in July-August but it was too close to lambing if we were pushed into a corner weather-wise,’’ Mr Williamson said.

“The ewes are pregnancy scanned in July and split into multiples, singles or dries with the empty ewes sold at the markets.

Multiple bearing ewes are given preferential grazing and a grain supplement while singles receive no special treatment.

“This country has always been crossbred lamb country – years ago Merinos were tried but crossbred ewes and lambs are a better enterprise on the basalt soils,’’ Mr Williamson said.

A dry spring in 2014 resulted in all lambs being early weaned at eight to 10 weeks of age and fed adlib with a barley ration. 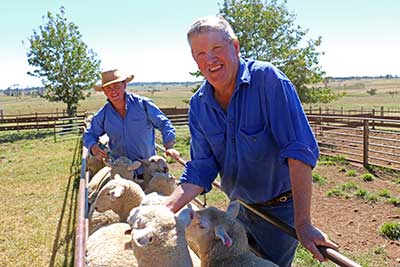 A portion were sold at six months of age over-the-hooks to Woolworths for 560c/kg (HSCW) (plus $8 skins) on February 2.

“Our steer weaners have averaged $800 at nine to 10 months of age but there’s definitely more money in sheep although they are more labour intensive,’’ he said.

“As I am retaining the White Suffolk cross ewes, I want those ewes to be fertile and milk well with the aim of having a self replacing flock,’’ he said.

“Dugald helps me with ram selection and I pick his brains for advice.’’
Last year, the entire ewe flock scanned at 140 per cent lambs and marked 125 per cent.

“To further improve lamb survival, the ewes are lambed in smaller mobs of 150, we bait and shoot foxes and monitor their nutrition,’’ Mr Wiliamson said.

The sheep are run on improved pastures of fescue, ryegrass, red and white clover, while 70ha of Eurabbie oats will be grazed then locked up for hay and seed.

A crop of superdan has been grown this year for additional hay or silage.

Pastures are fertilized with high analysis super at 120kg/ha.

The sheep are rotationally grazed behind the cattle to reduce the worm burden.

Mr Williamson welcomed the prospect of being able to value add his lambs with a potential White Suffolk branded product in the market place.

“We have found the White Suffolk cross lambs have a leaner carcass,’’ he said.

“Like very breed, the White Suffolks need to be out there in the public and pushing their brand.

“We can’t afford to play second fiddle these days – input costs are so high and every cent counts.’’ 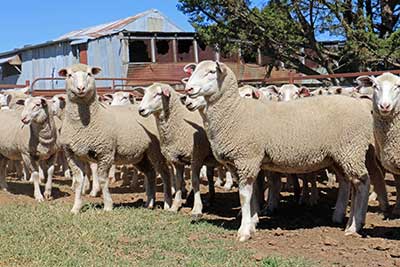 The maternal traits of the White Suffolk are used in a crossbreeding program by the Williamson family, of Guyra.

From these 50 lambs, 25 were in turn drafted off to enter the Guyra Show Society’s annual prime lamb competition.

The competition drew 3000 lambs with the Williamson’s winning champion export and overall champion pen on their inaugural entry.

Lambs were judged on the hoof by four independent lamb buyers using a points system.