There is no shame in having a mental illness - but it is a shame if you don't do something about it. 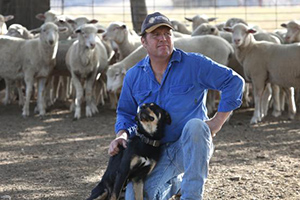 We are trying hard to remove the stigma surrounding it. It’s just an illness and illnesses can be treated.

Someone suffering a mental illness often feel completely overwhelmed with it and struggling under the weight of it - too exhausted and drained to anything about it until someone comes one and asks "Are you OK?"

We all have an important role to play in asking that question of the people on our immediate circle of family and friends.

Chris shared his story of losing his brother in a tragic farm accident. As a 24 year old male he thought he was tough, good at hiding his emotions. A short while after that he went on a planned back packing trip around the world. He really still had not grieved for his brother.

A dull ache inside developed and just stayed with him.  He slowly started to pull back from family and friends and social opportunities.  He became more of a hermit, lived a more solitary life on a farm.  His resilience started to erode.

Some family friends also lost sons in an accident. They were similar age to his brother. This also affected him deeply.

Chris started a new relationship that helped get him back into life, it felt good for a while.  He knew that it wasn't the right relationship and after 12 months it ended and then he really crashed. He couldn't understand why that affected him even more than his own brother’s death - his emotional resilience had really bottomed out.

He continued to portray a happy wild life on the outside, but was a mess on the inside.  He would spend hours and days and nights on the couch, too paralysed to get up even for a drink of water.

Meanwhile his family’s farm succession planning went well and it renewed his motivation to run his own farm.  He started to get himself out of it and then the drought hit in NSW.  He was not making good decisions for the farm and started spiralling downwards again and thoughts of suicide come into his mind.  When he thought about suicide the pain would go away.  But he saw how his family suffered after the death of his brother, so he knew he couldn't take that route.

People who do make the decision to suicide probably felt they were making the right decision for them at the time, but it’s the wrong decision.

He knew he needed help but could not fathom how to get help or to get out of it. He finally told his sister.  He procrastinated another few months until his sister locked him in his house and would not let him go until he had made an appointment with a psychologist. His sister may have saved his life.

Resilience is the building blocks of your life. It’s what allows you to cope with the hurdles in life, but they can be eroded away by stress.  Then comes along a ‘straw that breaks the camel’s back’ and you don’t have the resilience left to cope.

It's important to deal with your mental health as you go to keep that resilience strong.

It’s not contagious. You won't catch a mental illness by asking someone are you OK? But you may catch a life.