Presentation, the right skin, body length and carcase weight added up to a Victorian record price for the Baker family at the Bendigo yards.

The November drop purebred White Suffolk mixed sex lambs had been weaned in January and finished on home-grown oats to ring the bell at $267.50 in July.

“The result was a Victorian record at the time but it was broken the following day – it was pretty exciting,’’ Shane Baker said.

Shane and his wife Amber run a commercial flock of 300 White Suffolk and Corriedale-White Suffolk cross ewes at Baringhup to progeny test their stud sires of both breeds. 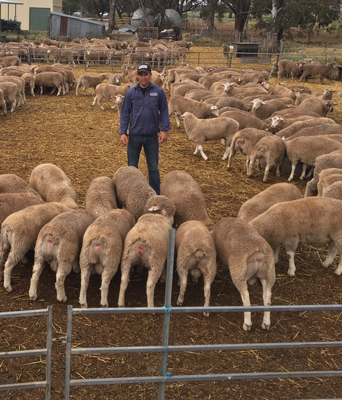 The lambs had been weaned onto a lupin stubble and introduced to oats in self-feeders in late January.

Shane has worked as a part-time booking clerk for Elders at the Bendigo saleyards for the past four years so has had a front row seat to the record prices received by prime lamb producers.

Presented at fat score four and dressing at 34kg, the Baker’s pen of 75 lambs sold on the day to repeat clients Australian Land Company.

“There wasn’t a big range of heavy lambs on the day - we had our lambs shorn by an immaculate shearer and were offered for sale with a five week skin,’’ Mr Baker said.

“I said I wouldn’t sell them if I couldn’t get $170 – heavy lamb prices had dipped earlier so we hung onto them and kept feeding them.

“Being a November drop, cutting teeth wasn’t an issue so we knew we could hold them for quite a bit longer.

“When the heavy lamb market lifted, it became an opportunity to sell them.

“We knew the end of the financial year would flush out a big range of heavy lambs so we held them to the following sale a fortnight later.

“There was a limited amount of heavy lambs that week and these were penned well, contributing to the price they achieved.

“At the end of the day, the price does involve a fair bit of luck as well.’’

The family sells pure and crossbred lambs at both the physical markets and over-the-hooks, depending on the prices.

Mr Baker said White Suffolk breeders had been progressive in focusing on carcase and eating quality traits, resulting in the high prices for commercial lambs.

“Breeders have been able to get more meat into the rams going out into the ewes, and breeding on,’’ he said.

“The White Suffolk lamb holds its freshness a lot longer and the processors have confidence in buying the consistently high yielding carcases.

“Over the past four years we have certainly changed the rams we have been using in our own flock based on what we see in the market.

“The sheep are more moderate than what we were once used to and we are aiming to get a lot more meat in the loin.

“It is a big asset to have that knowledge of what the lamb buyers are looking for.’’

Mr Baker said the flow-on benefits have resulted in a modern White Suffolk ewe that is fertile, a good milker and maintains body score when seasonal conditions are tough.

“Locally, our region is no where near the drought conditions of northern NSW and our lambing percentages have been slightly above last year,’’ he said.

“But, in drought affected NSW ewes have been walking off on multiples bringing marking percentages down.

“This is disappointing when lamb is such a profitable business at the moment.’’

Weaned at 14 weeks, the lambs are fed in stock containment areas for two weeks on a ration of barley, oaten hay and Weanermax, a rumen conditioner supplement.

“The market is fantastic and as lamb producers we used to think $5/kg was good money a few years ago,’’ he said.

“Now it is coming back to $7/kg from almost $10/kg and people are thinking the market has dropped but in actual fact, it is still very good.

“Everyone has to be making a profit because if only one person is, another person will be going out of business.

“It is good for the processors to see the prices come back to a more sustainable level and consumers will still buy lamb at the shops.’’

“From what I’ve seen in the yards, White Suffolks have gone from strength to strength in the market place.

“When I first started working in the saleyards, Poll Dorsets were the dominant breed but the White Suffolks have taken that mantle over.

“A lot of the White Suffolk cross lambs offered at Bendigo are out of Merino or first cross ewes for the benefits of lambing ease and clean points to reduce the grass seed problems.’’

Mr Baker said prices held firm at the October 15 sale at Bendigo, on the back of a nation wide lack of supply.