A low, squat, wide brick of an animal will be the efficient breeding ewe of 2027.

Sheep scientist Dr Mark Ferguson, of New Zealand, is urging Australian commercial producers to open their minds to this futuristic concept over the next decade.

“If we want to breed a profitable sheep, we must learn to like what it looks like,’’ Dr Ferguson said.

He said the drive for maternal efficiency and selection for muscling would change maturity pattern and shape. 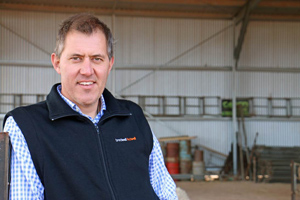 “Mature ewe size is reduced, the face is plainer, and the shape has gone from a big frame to a low, squat, wide brick of an animal,’’ he said.

“They are positive for muscle and fat, and robust. We have to keep our minds open to what sheep need to look like to make us money.”

“At ram sales, the biggest correlation with price is the weight of the animal on the day.”

“As an industry, we are really good at selecting for big animals but who likes handling big, 100kg stroppy ewes?”

“As we get into these extreme muscling sheep, we are seeing animals with early maturity and increasing width.’’

As the principal of neXtgen Agri Ltd, Dr Ferguson was a keynote speaker at the Trigger Vale White Suffolks 2017 information day on August 18, in southern NSW.

Dr Ferguson said the rams bought this year would impact on a producer’s business for the next 10 years.

“If you are looking at ram prices today, that is not relevant to your breeding program,’’ he said.

“Think about the trends and what has changed from 10 years ago to now, and make some predictions about what will change in the future.”

“In 10 years time the scrutiny from activists is not going to disappear – only if brands step up and make them irrelevant through their own scrutiny on the industry.’’

Dr Ferguson said the plant based protein movement would confront the lamb industry over the next decade.

“People are producing meat without having any animals involved and they will take market share but I don’t think they will wipe out meat consumption.”

“The way these products are being marketed is about the footprint our animal industries have on the world and we will see a whole new wave of pressure on our industry.’’

Dr Ferguson said grain may be diverted to human consumption within 10 years so sheep may be solely pasture finished.

Chemical use in meat sheep production systems will also increasingly come under scrutiny.

“I see the rise and rise of ethical products based on animal welfare and chemical use – big brands are developing this as their platform,’’ Dr Ferguson said.

“But there is opportunity in the sense that people want to connect with farmers, want transparency in the production system and know who is producing their fibre and food.”

“If we get our story right and tell it well, it is a big opportunity for our industry.’’

Going into the next decade, yearling fat depth will be a key selection trait in breeding ewes, along with genetic resistance to worms to reduce drench usage, and footrot resistance.

Yearling eye muscle depth will be the turbo-charger for the modern ewe.