Most producers want their lambs to have a high growth rate, but focusing on just one profit driver can be counter-productive.

“Successful lamb producers near Glen Innes approached me with a problem,” he said. 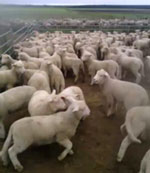 “They had no trouble forward contracting their lambs and meeting target weights of 24–28kg HSCW (hot standard carcase weight); however, for four years in a row they were assisting 10% of their ewes during lambing and this was having a major impact on profits.”

Brent said most good operators in the New England aimed to keep their ewe losses to less than 3%.

“After some discussion we decided on two trials. The first aimed to minimise ewe and lamb losses due to dystocia and the second investigated the difference in the value of lambs sired by rams with breeding values in the top 10% PWT (growth – post weaning weight) compared to rams with industry average PWT,” he said.

All sires were visually assessed and selected on the same structural criteria.

The ewes were lambed in August/September and lambs marked late September. Records were kept of ewe assistance and lambing losses.

“This meant the cost of losing ewes and lambs from dystocia was about $320/ewe when the trial achieved close to 150% weaning rates,” he said.

“A difference in 2% in death rate between the groups represented a loss of 20 ewes or $4,000/1,000 ewes joined without allowing for lamb losses.”

Both groups had moderate birth weight figures; however, one had high growth rate ASBVs while the other had only average.

They were joined to separate groups of randomly selected mature age crossbred ewes from the same mob.

“Their lambs were 5.1kg (live weight) heavier at sale time which earned an extra $15 plus/lamb compared to the average growth rate- sired lambs,” he said.

“The trial averaged 100 lambs/ram joined which returned an extra $1,500 per ram in the first year. I think the message is fairly clear."

Brent said the trials not only solved the Glen Innes producers’ problems with dystocia, but showed them how to use ASBVs to easily improve their profitability.

“The simplest way for producers to increase their returns from lamb production is to minimise ewe losses through buying terminal sires with moderate ASBVs for birth weight, visually correct shoulder/ brisket structure and good ASBVs for PWT, so lambs are heavier at the same age of turnoff,” he said.