WHITE Suffolk rams are used over maiden ewes at Alfalfa, Canowindra, for a boost in fertility and easy of lambing.

Michael Payten and wife Helen, along with his brother John, run 3200 Border Leicester/Merino-cross ewes on 1150 hectares.

They buy about 500 to 600 ewes in from the same Wellington breeder in March each year. 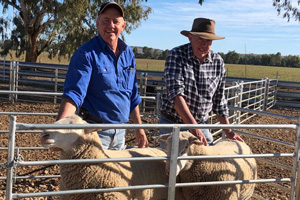 DOING THE JOB: Michael and John Payten with some of their White Suffolk rams.

All maiden ewes, bought as nine-month-old lambs, are joined to White Suffolk rams, getting off the truck to be joined immediately.

The older ewes are joined to Poll Dorset rams.

"The maidens are easier to lamb down, size of the lamb is good, along with the shoulders and head shape.

"The White Suffolk rams are also keen to do the job - they're always with the mob."

That increased interaction was obvious in Mr Payten's recent scanning of the maidens, with only 48 of 620 ewes not in lamb after a five-week joining.

"They've been rejoined to give them a second chance and anything not in lamb on the second joining will be culled."

"Our goal is to mark about 4500 lambs each year, so we average about 140pc lambing most years.

"I'm convinced the White Suffolks get better outcomes as far as joining, because the rams are on the job a bit more."

"Robert's rams fit the bill. One of last year's rams, he thought was the best commercial ram he'd ever bred."

Lambs are mainly turned off for the trade lamb market as suckers at four to five months, weighing close to 50 kilograms for a carcase weight of 22kg to 23kg. Depending on the season, some lambs are shorn and carried over.

"We're not really interested in producing a 65kg lamb even though they're making great money. The best profitability is in the trade lamb market. We averaged just over $190 a head for our entire drop last year."

Most lambs are sold over the hook to Woolworths or Coles, with the balance in through the Cowra saleyards.

"In the past we've used rams that are too lean, but with early lambs, they've got to have the fat cover."

The Paytens have the capacity to finish lambs in an on-farm feedlot if needed.

"Sometimes when lambs get to 38kg to 40kg we'll give them five to six weeks in a feedlot to get them off the paddock.

"In normal years they're on pastures and lucerne flats. We've been lucky to get a bit of local agistment this winter which has worked out for us, giving our pastures a break, and we're running the ewes and lambs on grazing cereals - Kittyhawk wheat and Urambie barley."