Ms Sayer sourced a 180kg bale of White Suffolk-Merino cross wool from Warooka Station, Victoria, with the aim of turning it into worsted spun wool.

She described the White Suffolk-Merino cross as an “often overlooked wool’’ but one which takes dye well, is versatile and soft yet durable.

“The fleece is springy, has great elasticity and strength,’’ Ms Sayer said.

“It is perfect for hard wearing items like socks and everyday outer wear.

“It does not felt easily so a gentle machine wash may be possible.’’

The 26 micron wool was sourced through Fox & Lillie and processed through the combing machine at Goldfields Mohair Farm, Bendigo, before being put through its paces at Paddock to Ply in Cooroy, Queensland.

Samples of two-ply knitting yarn were produced for lace knitting, weaving and machine knitting into jumpers.

“All you hear about is Merino, Merino, Merino but we have lots of other sheep in Australia – wools ain’t wools and not everything will spin up the way you hope it will,’’ Ms Sayer said.

“They are all different and the machinery can’t cope with varying lengths so the grower needs to be educated on specific lengths if they want to spin their wool for the worsted process. 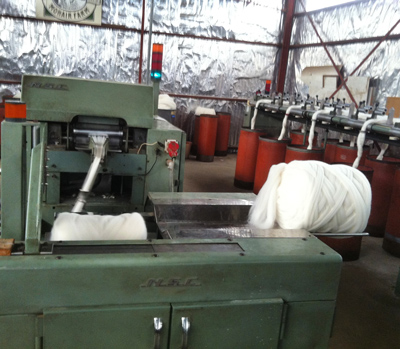 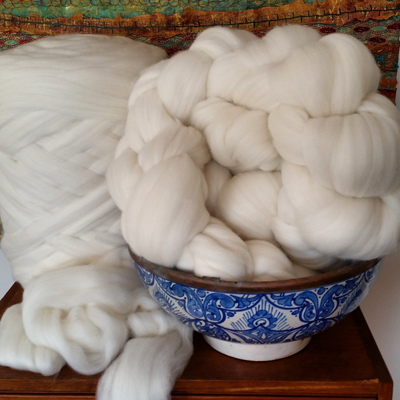 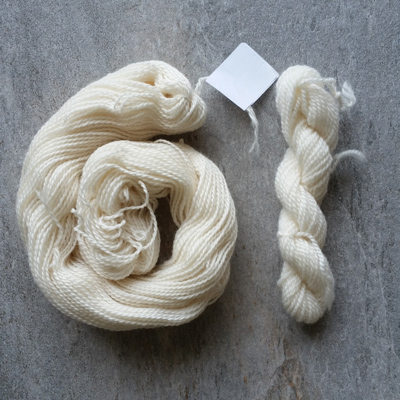 “I require staple lengths of 55-75mm – lengths of the machinery can only be varied so much.

“If it is for next-of-skin clothing, the softer the better but different wools are for different purposes – 24-25 micron is great for socks as it wears better.’’

Spinnability and the breakage rate, or tensile strength, of the wool is also important.

Paddock to Ply was established by Suzette four years ago to provide processing and production for 100 per cent Australian sourced, natural fibres.

These fibres are manufactured into luxury, limited edition, fine spun yarns for both hand and machine knitting.

The Paddock to Ply mill can process up to 20 tonnes of raw fibre, and was inspired by the need to address the lack of milling resources in Australia.

Just 0.03 per cent of the nation’s wool is processed within the country, making it almost impossible to buy 100 per cent Australian grown, scoured, processed and spun natural fibre yarns.

“The few wool processing companies in existence, Paddock to Ply included, are trying to recreate an industry in Australia that has simply been devastated,’’ Ms Sawyer said.

“It has been a huge learning curve as people with those kind of skills are gone.

“It has taken many phone calls to find three people experienced in the industry as mentors – one actually works in China and a second in South Australia so they are very rare and hard to get hold of.

“With their help they were able to tell me what size mill I needed to make a viable living.

“I was able to source a two-tonne 1974 German made spinning frame and it effortlessly spins the most amazing, fine yarn.’’

Possessing a background in textiles, Suzette began her journey after failing to source 100 per cent Australian made wool while planning to open a yarn shop.

“The more I researched it, the more I realized what had happened to the industry and how we didn’t have a 100 per cent Australian product,’’ she said.

“I did a small business course to start a wool shop but came out with a wool mill.’’

At that point, the search began to source and learn about raw wool for spinning.

“It was a learning curve as I had to establish if I just process for people or have a range of product with a background story designers can buy,’’ Ms Sayer said.

The wool is first scoured at one of three plants in Victoria specializing in small lots, followed by processing into comb tops before landing at Paddock to Ply.

Dyeing is carried out by the nation’s last commercial dyeing plant at Geelong.

Suzette specialises in matching people wanting to start their own knitwear line with manufacturers and designers.

“I’m happy to give people information as there are so few mills in Australia,’’ she said.

“If we shared information and got together, we could be exporting overseas as a group of mini millers, spinners and top makers.

“The knitwear manufacturers and designers would love a 100 per cent Australian product but cannot get it.

“It is a matter of growers knowing the requirements of pre-processing and spinning.

“Combing is quite harsh and will break the fibres so the tensile strength is really important.

“One bale I had was full of vegetable matter so over 50 per cent of it was lost in pre-processing and that makes the manufacturing process really expensive.

“The grower needs to think about vegetable matter, shearing quality, clip preparation, skirting more or looking at weed control on the farm – if you want a top quality fleece you have to go the extra mile.

“In a typical bale, I’m looking at short ends and when it is washed, 15-20 per cent is lost in dirt and grease alone.

“For designers who want to source product, they have to be aware of exactly what the process entails.’’

Ms Sayer said there was a strong trend among knitwear manufacturers and designers to demand ethically produced and non-mulesed wools.

“Organic, biodynamic and ethical wool is in demand – they are all aware of the mulesing issue,’’ she said.

“They don’t always know what those words mean and it is a matter of educating them as to why these things are done.’’