“Ban the scan” is becoming the catch cry around the nation’s sheep yards.

Sheep consultant and educator Dr Jason Trompf is urging sheep producers to move away from pregnancy scanning for wet/dry, or pregnancy only, to instead detecting for multiples (dry, single and twin bearing).

“By wet-dry scanning, or not scanning at all, we are treating our ewes with contempt,’’ Dr Trompf said. 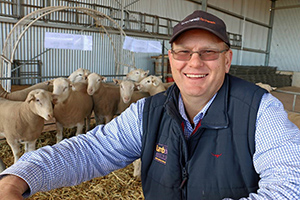 “More than 3000 producers have participated in Lifetime Ewe Management and the producers that have adopted scanning for twins and differential management have lifted their whole farm weaning by 15 per cent.”

“The break even costs on every extra lamb is 15 per cent lower than the producer benignly feeding all ewes.”

“There are farms consistently scanning 135 per cent and marking 110 per cent lambs in Merinos. It requires attention to detail but the pay-offs are profound.’’

Ideally, pregnancy scanning should be carried out at day 75-80 on a five-week joining (40 days after ram removal).

“Don’t scan and leave the ewes boxed together then separate singles and twins at pre-lambing inoculation or drenching, as the opportunity for differential management of singles and twins to drive ewe and lamb survival is reduced,’’ Dr Trompf said.

“Once a ewe drops in body condition score she partitions less resources to the developing foetus, then birthweight drops which is the key for twin lamb survival.

“Overall, the keys that drive lamb survival are birthweight, body composition (muscle and positive fat) and privacy (in the lambing paddock).’’

Dr Trompf, of JT Agri-Source, was a keynote speaker at the Trigger Vale White Suffolks 2017 information day on August 18, in southern NSW.

He asked the 100-strong crowd of commercial producers if they were giving “blue chip” management to their flock ewes.

“We still have an industry that is treating this animal with contempt – we want her to grow good wool, reproduce and keep her lambs alive,’’ he said.

“At that last count from the census there was 37 million breeding ewes – we are eating our flock and at the same time treating her with contempt.’’

Dr Trompf said less than 20 per cent of the nation’s 37 million breeding ewes were managed under targeted treatment.

This means 80 per cent of the ewe flock lambs down in conditions where pasture is not allocated based on pregnancy status.

National marking rates have increased by 10 per cent in the last 10 years.

Dr Trompf said a doubling of non-Merino or first-cross ewe numbers and the advent of self-replacing meat flocks from 2008 onwards accounted for almost half of the gains in lamb marking.

“We are no longer reliant on first-cross ewes – less than 10 per cent of the ewes nationally are Merinos joined to Border Leicester rams.

“Only 40 per cent of the ewe lambs born in Australia are pure Merino so we are effectively ending up with a self-replacing meat flock and a Merino industry.’’

Census data taken in 2016 revealed 28 per cent of sheep producers had switched away from Merinos since 2011.

Dr Trompf said one of the common aims across the sheep types was to lift kilograms of lamb weaned per hectare.

He said the number of live lambs was a function of ewe stocking rate multipled by scanning percentage multiplied by lamb survival.

“Our nation’s flock is awash with fertility but it is the conversion of that potential into live lambs which grow quickly is what counts.”

“Lamb survival is a whole of sheep industry challenge and we are making progress but more widespread adoption of improved management is needed.’’

“Once non-Merino single bearing ewes are over condition score 3.3, you are killing ewes and lambs with kindness,’’ Dr Trompf said.

“The target in this ewe type we have to strive for is half a condition score in favour of the twin over the single at the point of lambing, say 2.8 condition score for single bearers and 3.3 for twins.’’

“At the end of the day we’ve got to drive feed production, high and balanced soil fertility on good pasture species, and turn that pasture into product with high pasture utilisation,’’ Dr Trompf said.