A WHITE Suffolk-Merino crossbred prime lamb works best for the O'Meehan family and its sheep enterprise at Caralinga Farms, Borden.

Myles O'Meehan is the fourth generation to run his family's original property, which has been in the family for nearly 114 years.

His father Phillip is still actively working on the farm, as well as full-time employee Piet Van Zyl.

With the recent addition of another property four years ago, the O'Meehans run a flock of about 2500 breeding ewes on 4000 arable hectares.

Prior to purchasing the additional property, the family was trading sheep during the summer months, but since the purchase of some extra land they started buying in ewes.

Of that land, 3000ha is dedicated to their cropping of wheat, barley and canola, with this year being the first year the family hasn't seeded any lupins.

When comparing the sides of the business in terms of performance, Mr O'Meehan considers his sheep to be the equivalent of a lupin crop in the rotation.

He said the sheep well and truly outperformed a lupin crop and felt they get a better weed control and nitrogen fix with lucerne and vetch compared to lupins.

It has only been in the past four to five years they have started breeding their own prime lambs, producing a White Suffolk-Merino lamb.

Each year the O'Meehans purchase one mob of Merino ewes, having bought in 720 ewes last year, with the next lot of ewes due in October.

The operation has two joinings, with a small mob of ewes being mated in October and the rest being joined in February for a five to six-week period. 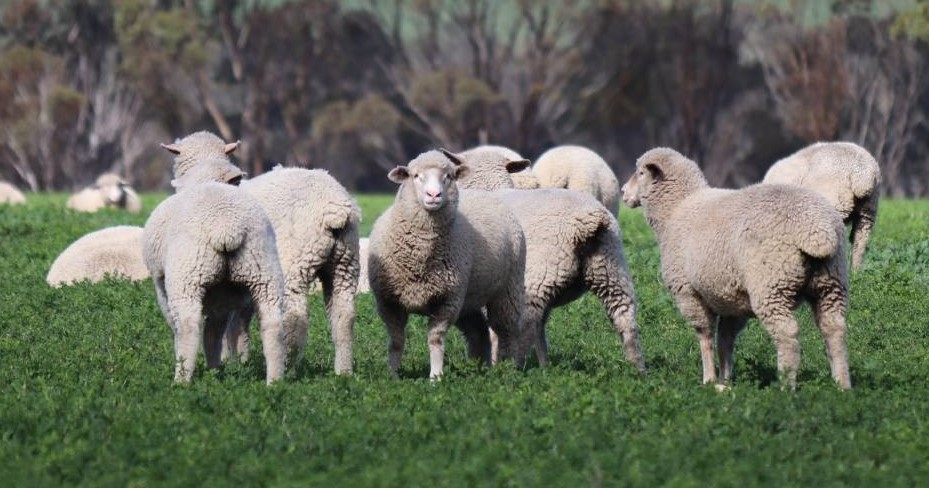 The O'Meehans run a flock of about 2500 breeding ewes on 4000 arable hectares. Photo courtesy Farm Weekly.

The majority of the White Suffolk rams are sourced from the Hyde family's Kohat stud, Ongerup, with a few rams purchased from the Barrows family, Borden.

For extra sheep feed, the O'Meehans seed pasture paddocks including Lucerne and Chicory, along with some Vetch, barley and Balansa clover.

Their Lucerne and Chicory pastures paddocks are put in for a four to five-year rotation before being put back into crop.

Over the years, Mr O'Meehan said they have tried other sheep breeds such as Prime SAMMs and Poll Dorsets, but while they performed well, he said the White Suffolks performed better.

He likes White Suffolk crossbred lambs because they can run larger number of sheep and the lambs have great growth rates so that they can sell into early markets, with their earliest lamb being sold to the abattoir within six months.

The majority of lambs are sold directly to WAMMCO at 50 to 55kg liveweight for a dressed weight average of 22-24kg.

Before being sold, all the lambs are weighed on-farm and the O'Meehans have their own truck which they use to transport the lambs to the abattoir.

Shearing is in June and they cut an average of 90 bales annually, including the crossbreds wool.

Mr O'Meehan said their micron varied due to ewes being bought in, but said their wool was usually around 21-22 micron.

"Our main focus is on prime lambs," he said.

When supplement feeding to fill the feed gap, the O'Meehans use lick feeders and this year, due to a lack of rainfall, they put their ewes into confinement feeding for six weeks.

"We have only just stopped feeding three weeks ago," Mr O'Meehan said.

"It's probably the longest we've had to feed."

Mr O'Meehan said the past season was an average one, but they received just enough rainfall at the right times.

They didn't receive much rain this year until August which turned the season around.

"It was really dry, but we've had a fantastic August," he said.

"Water was becoming a serious issue with three quarters of our dams being dry, but we were lucky to receive a great rain at the start of August and get some good run off into clean dams."

When culling their flock, the O'Meehans sell the older ewes that lamb in March and dry ewes.

All their maidens are pregnancy tested each year and the ewes are sold after they've had their fifth lamb.

Mr O'Meehan said the prices for sheep had been outstanding and hoped they would remain high.

"With the prices for both meat and wool where they have been, our sheep have done really well," Mr O'Meehan said.

As a testament to the quality of lambs, the O'Meehans produce, they won the 2018/19 WAMMCO producer of the year award, which they described as a nice surprise.

Looking to the future, the O'Meehans are considering planting RM4 Vetch and barley early to help fill feed gaps, especially during seeding.