The Australian White Suffolk Association has made a stand to wipe out ovine brucellosis once and for all with membership of the association restricted to producers accredited under the national ovine brucellosis-free accreditation scheme.

Ovine brucellosis is a venereal disease in sheep which continues to have a costly impact on the sheep industry with lambing rates impacted by infertility or reduced ram fertility, longer lambing periods, abortions in ewes and weak lambs.

The potential impact of brucellosis on the national sheep flock and cost to the industry through reduced lambing rates is significant, yet ovine brucellosis is not a notifiable disease.

The responsibility for protecting flocks from the disease sits with producers who need to be fully aware of the health status of any potential ram being purchased, particularly in regards to ovine brucellosis, as the disease is incurable in rams leading to them usually being culled.

Past president of the Australian White Suffolk Association Allan Piggott said the association had taken a positive step towards wiping out an "insidious disease'' that had kept bubbling along in the background of the sheep population despite numerous campaigns to wipe it out.

"It is really important that people only buy accredited sheep,'' Mr Piggott said.

"The reason we can't get on top of it is that this disease bubbles along because there are elements out there that are not doing the right thing by the industry.

"There are people who continue to buy sheep that haven't been tested. They put them with their own rams and they infect those rams and so it continues on.

"The Australian White Suffolk Association should be congratulated for its actions and it would be great for other associations to get on board.''

The National Sheep Health Declaration should provide information as to whether rams are from a flock that is in an ovine brucellosis accredited scheme. 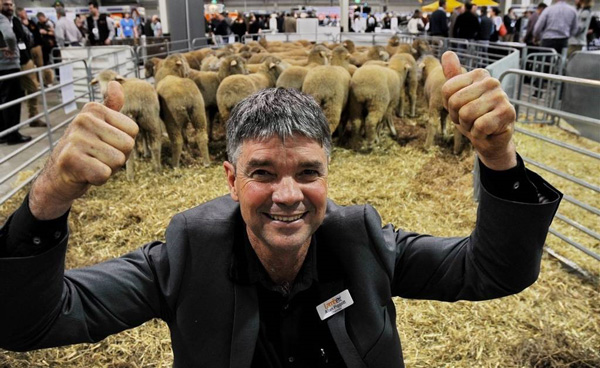 GOOD MOVE: Past president of AWSA Allan Piggott says the association should be congratulated for its stance on producers being OB-free accredited.

The government administration rate for the scheme is currently under review but initial accreditation costs to join the scheme occurs on a sliding scale ranging from $44 to $110 while to become re-accredited ranges from $27.50 to $82.50.

"With data and proof of animal health now an important part in accessing and maintaining markets (both international and domestic), producers are increasingly undertaking accreditation procedures to show they have suitable on-farm biosecurity practices in place,'' a PIRSA spokesman said.

"PIRSA Animal Health recommends all ram breeders to be involved in the program while commercial producers are advised to monitor and test their rams for OB as part of an annual pre-joining ram fertility inspection.''

When standards are met the chief veterinary officer, Dr Mary Carr, will then issue certificates to flock owners and producers should check certificates are within the expiry date.