A focus on early growth and carcase quality is paying dividends for South Australian sheep producers, the Tucker family, with their White Suffolk-cross lambs keenly sought by local processors.

Brian and Anne Tucker, Tuckerland, Keith, have been using White Suffolk sires for nearly 20 years and continue to be impressed with the breed's ease of lambing, growth rates and carcase traits. 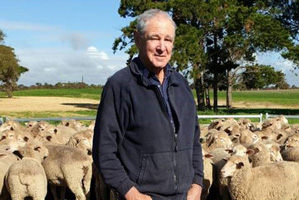 PRIME LAMB: Brian Tucker, Tuckerland, Keith, SA, runs about 800 Merinos ewes at Keith, SA, and has been joining them to White Suffolk rams for nearly 20 years.

"We had a self-replacing Merino flock with a percentage of ewes joined to Poll Dorsets for prime lamb production," Mr Tucker said.

"White Suffolks were becoming more popular so we thought we'd give them a trial.

"We've found the White Suffolk rams complement our Merino ewes really well and they have certainly been very profitable."

"Structural correctness is very important, I look for plain-bodied rams with open faces, clean points, good feet and good length of carcase. I like a easy-care White Suffolk ram with a balanced set of good Lambplan figures."

Extensive stands of dryland lucerne play a key role in the sheep operation, providing valuable feed during joining and lambing.

All the ewes are joined in November to start lambing from April onwards. Lambing percentages generally average about 100 per cent.

"We keep the management pretty simple at joining, both the rams and ewes will be on lucerne-based paddocks prior to joining and during lambing which ensures they are in really good condition."

The ewes will lamb in the most sheltered paddocks with mob sizes of about 250 ewes maintained for ease of management.

Fresh, clean water is also important and all the paddocks have troughs installed which are supplied by an underground bore.

Mr Tucker aims to sell the lambs at a dressed weight of between 26 to 28 kilograms, depending on the season.

"The deciding factor here is that we need to have them sold before the grass seeds start, so we like them gone by the end of October," he said.

"If it is a really good year with plenty of feed, they will stay on their mothers and be sold as suckers.

"We probably get out of them up to two months earlier than we would if we wean them." 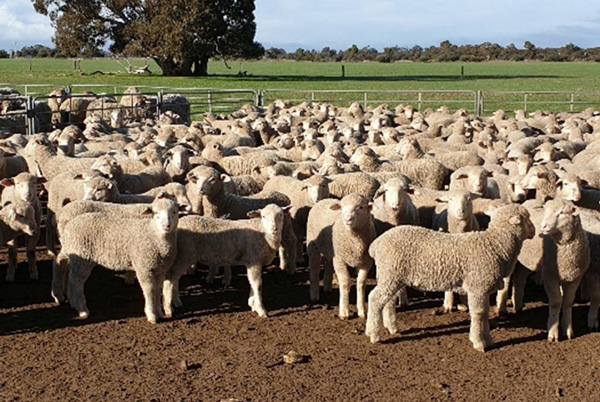 FIRST-CROSS PRODUCTION: The White Suffolk-cross lambs grown out in the Tucker's feedlot will be sold at a dressed weight of between 26 and 28 kilograms.

Lambs that haven't reached a saleable weight by the end of October will be weaned and placed in a feedlot.

Mr Tucker also buys in up to 500 White Suffolk-cross store lambs through the local market to be fed.

The feedlot lambs will start on a mix of oats and barley with pellets also provided which act as a buffer and assist rumen development.

Once they have acclimatised to the grain, a ration of straight barley or barley and faba beans is fed ad lib.

Hay or straw is also supplied for roughage, depending on farm fodder reserves.

"We aim to grow all our feed and not buy any grain in."

The majority of lambs are sold over the hooks to Thomas Foods International, Murray Bridge, SA, and more recently to their plant at Lobethal, SA.

Depending on the market lambs may also be sold through the Naracoorte saleyards, SA.

"Some years if the price is good we will sell the suckers at a dressed weight of about 24kg, but anything that goes through the feedlot we take up to 26 to 28kg.

"In February, we sold 1240 lambs, which were a mix of weaned home-grown lambs and bought in store lambs, for an average of $265.80 with the tops making $300, which was an excellent result for us.

"We have been really pleased with how the White Suffolk-cross lambs sell and the feedback from the abattoir is always very positive."

Merino ewe replacements are purchased from the local off-shears sales in November, with Mr Tucker preferring to select big-framed, plain-bodied ewes which average about 21 micron.

Regular fertiliser applications are also carried out. The mixed pasture and dryland lucerne paddocks receive a blanket application of 100kg/ha of single super in autumn to boost pasture growth before lambing.