Woolgrower Clive Pearson was determined to prove the old timers wrong when he was told crossbred lambs would never suit the western tablelands country of northern NSW.

A third generation grazier at Boorolong, near Armidale, Clive had been a “dyed in the wool’’ Merino producer for decades until poor wool prices convinced him to give White Suffolks a go.

Old hands had told him crossbred lambs would never finish on the native pastures in the 750-800mm undulating to hilly country.

“They were lambing in October and the springs were cutting out before the lambs got going,’’ Clive said. 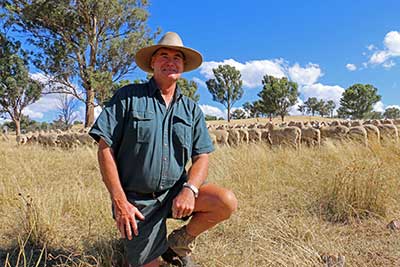 Clive Pearson with 2.5 to 3.5 year-old Border Leicester-Merino ewes being joined to White Suffolk rams on his property at Boorolong.

“I have pushed back lambing to July-August and am able to finish the lambs in the spring.

“This enables us to catch the gap in the market before the southern suckers come on.’’

The stock are grazed on a mix of native pastures, ryegrass, fescue and clover, aerially fertilized most years with 100kg/ha of single super.

The Pearsons have observed a shift in enterprise mixes across the district from superfine wool production and beef cattle a decade ago to prime lamb production.

Producers preferred the White Suffolk’s lambing ease out of the smaller framed New England ewe over other prime lamb breeds.

Clive said producers were able to value add their fine wool ewes by selling them scanned-in-lamb to White Suffolk rams on AuctionsPlus. 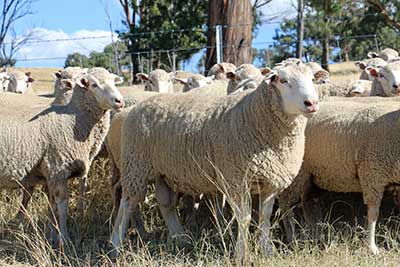 “Those ewes were selling up to $200 and there was no freight while the wether portion were sold as store lambs,’’ he said.

“Three years ago I decided to start keeping the first-cross ewes for myself but wanted to increase the frame size.’’
Armidale agent Paul Watts recommended Clive try White Suffolks and suggested the Wilsons Creek stud at Uralla.

“Paul told me the lambs would be born small but grow quickly,’’ Clive said.

He has been impressed with the White Suffolks lambing ease, quick finishing ability of the progeny and the longevity of the rams.

Clive even watched the White Suffolk judging at the Australian Sheep and Wool Show, at Bendigo, to learn more about selecting the correct breed type.

He runs the lambing ewes in mobs of 300 in the remnant bush and has averaged 115 per cent lambing.

They are lambed in the wool to reduce mismothering in cold weather and then shorn in November-December.
The first-cross lambs are tipped in April and shorn again in December.

Instead of running Merino wethers on the hills until they were four to five years old, Clive is now able to turn off the August-drop White Suffolk-cross lambs by the end of January.

He sold 460 mixed sex suckers at Guyra saleyards in late January – his numbers will increase to 600 next year.

“Those lambs were born in a drought, and spent all their life on dirt and sheep pellets – the bottom end sold to store buyers at the same sale.’’

Clive classes his own Merino flock, joining 25 per cent to Border Leicester rams and 20 per cent to White Suffolks, with the balance back to Merinos.

He selects White Suffolk rams on body length, muscle, birthweight and high mature weight, paying up to $1400.The rams are conditioned pre-joining with pellets and joined for six weeks.

Clive said the prime lambs out competed both Merinos and cattle on gross margins.

“The crossbred ewe returned $144 per head with the wool and lambs while the Merino returned $40 in wool – it’s been a tough cattle market with weaners averaging $450,’’ he said.

“The result makes crossbred lambs an attractive proposition in this country.’’

Clive is looking forward to the prospect of value adding to the White Suffolk cross lambs with the breed’s own lamb brand.

“I will definitely supply lambs – it’s a great idea as long as we are guaranteed a good price.’’ 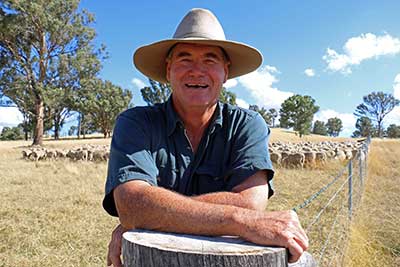