Quality White Suffolk sires are a perfect match for Merino ewes in the Hasell family's first and second-cross prime lamb enterprise at Dunkeld.

Wayne and Jane Hasell, their children Chloe and Sam, and his fiance Sinaed Finck, decided to diversify their ultrafine wool operation about 15 years ago in an effort to increase farm productivity.

They currently join 1800 medium Merino ewes to White Suffolk rams and 2000 Merino/White Suffolk-cross ewes which are mated to Poll Dorset sires, which are run alongside the family's self-replacing flock of 1000 Merino ewes on their 650-hectare property, Myonagh. 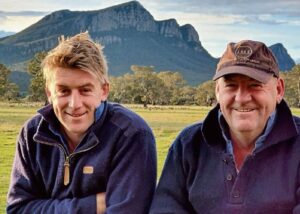 Sam and Wayne Hasell, Myonagh, Dunkeld, have been using White Suffolk sires over their Merino ewes for the past 15 years and continue to be pleased with the cross.

The Hasells also carry out contract lamb marking and other sheep husbandry operations in the western district while Sam owns a contract crutching business.

"We used to run all superfine/ultrafine Merinos averaging 14.5 to 15.5 micron but decided to diversify because we just weren't getting the returns per hectare," Mr Hasell said.

"We classed out some of our plainer, bigger-framed Merino ewes and did some research on what breed would be the best cross and decided to go for White Suffolks."

According to Mr Hasell, the White Suffolk-cross has delivered a range of benefits to their crossbreeding program including ease of lambing, fast growth rates and improved carcase quality.

"The first-cross ewes are such a vigorous and tough breeding ewe. Their resilience and capacity to carry on and bounce back after some of our leaner seasons is a huge part of their appeal," Mr Hasell said.

"They hold their condition very well and as maidens they are one of the best mothers we've had.

"The Merino/White Suffolk-cross is also not as large as a traditional first-cross ewe which allows us to run higher stocking rates which equates to more lambs on the ground and more productivity on the farm.

"In the past, prime lambs made up about 10 per cent of our income and wool was 90pc but now it's the other way round."

The Hasells have been sourcing White Suffolk rams from Dean and Mandy Cameron's Noremac stud near Balmoral, selecting high-performing sires that will complement their Merino ewes.

Mr Hasell likes to use a combination of visual assessment and Australian Sheep Breeding Values (ASBVs) with a focus on ease of lambing, structure and growth and carcase traits.

"I prefer to select my rams visually, looking for a plainer type with open points, good bone structure and good feet," he said.

"We'll also look pretty closely at their genetics as there are certain sire lines we like to use from Noremac which maintain the sheep type we are trying to breed.

"We use the ASBVs as a final guide to our selection looking at low birth weight for ease of lambing, growth rates and eye muscle depth."

All the ewes are joined in December for six weeks to start lambing from May onwards.

With ewe body weight a key driver of fertility, Mr Hasell aims to have all the ewes in condition score three or more prior to joining.

Although pregnancy scanning is carried out, the Hasells don't separate the single and twin-bearing ewes, preferring to maintain small mob sizes of less than 200 ewes for ease of management.

This year, both the Merino/White Suffolk-cross ewes and the Merinos joined to White Suffolk rams achieved lamb marking rates of 130pc.

"We find as long as the Merino ewes are in good condition there isn't much difference between their lambing percentages and the first-cross ewes, they lamb very well," Mr Hasell said.

"This year has been a great year, scanning and lamb marking rates have been very high throughout our area."

The Hasells aim to turn off the second-cross lambs and as many of the first-cross wether lambs as possible, as suckers. A carcase weight of 24kg is targeted with the majority of lambs going over the hooks to supply the domestic supermarket trade.

"We start selling them from November onwards and depending on the available feed will try to get most of the lambs off by Christmas," Mr Hasell said.

Lambs that haven't reached sale weight will be weaned, shorn and placed into a small on-farm feedlot for about eight weeks. They are supplemented with barley and lupins fed in lick feeders and ad lib hay for roughage.

Traditionally the first-cross wether lamb portion has probably been viewed as a by-product but the Merino/White Suffolk-cross has performed very well for us.

"Their growth rates are comparable to the second-cross lambs.

"We generally find about 60pc of the first-cross lambs will go as suckers while the remaining 40pc go into the feedlot to be finished and sold in February and March."

The replacement first-cross ewe lambs are weaned and will graze better quality pasture paddocks in small mobs until they are grown out ready for joining in the following December.

"We look for a nice structure, good clean feet, plenty of good bone on them and preferably with a nice clean breech and open points," Mr Hasell said.

"We want them to be condition score three at joining and well-grown."

A flexible grazing rotation is employed and the Hasells have split paddocks into smaller sizes for improved pasture utilisation.