A focus on commercial traits paid off for young stud sheep breeders Ian and Sarah James when they took out the inaugural ram lamb trade class at the Australian White Suffolk Association conference.

The couple entered a pen of three ram lambs by homebred sires from their Iona stud, Henty, Victoria, in the competition to reaffirm their breeding objectives of moderate birthweight, growth rate and structural correctness.

The pen of three ram lambs competition, judged by Alastair Day, Allendale Studs, Bordertown, South Australia, was a highlight of the Australian White Suffolk Association conference in Hamilton this week.

He said the competition was modelled on a similar event held at the Hamilton Beef Expo, and was an extra drawcard on the conference program.

Ian and Sarah James established their Iona stud in 2007 initially to breed White Suffolk rams for their commercial flock of 2000 ewes.

“We selected our entries on a visual basis from 96 rams and then narrowed them down on figures,’’ Mr James said.

“We have been using artificial insemination to keep the fat cover and birthweights right for people using them over Merinos.

“It was a huge surprise to win – we don’t show but sell rams privately into mainly Merino or composite ewe flocks.”

Export class winner Lachy Day described the competition as “industry relevant’’ and entered as an educational and feedback exercise.

His June-drop rams were by three different sires and selected using a combination of visual appraisal and estimated breeding values. 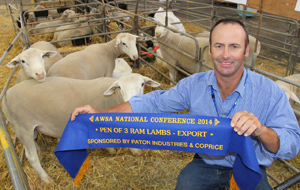 “The rams scored well for structure – I’m a big fan of measured performance but foremost the rams must be structurally correct,’’ Mr Day said.

He said the challenge for the breed was to continue at the forefront of the prime lamb industry by adopting new technologies.